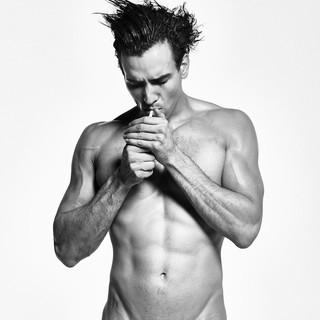 For Vogue Man I had the honor to speak with Marwan Kenzari, a highly talented Dutch actor who is on the verge of making it in America. This year, he will star next to Anthony Hopkins, Willem Dafoe and Christian Bale – among other celebrities of the big screen. His latest announcement is that he will star next to Tom Cruise in a remake of The Mummy.

A big man, so to speak. A superstar, as director Jim Taihuttu puts it. Taihuttu directed Kenzari when the world didn’t know him yet. First in Rabat, then in the laureated movie Wolf, in which Kenzari played a kick boxer struggling to stay on the right track. Taihuttu made Wolf especially for Kenzari. ‘I thought: I just have to give this man something to dive into,’  Taihuttu told me earlier. ‘Whatever it is, he will do it brilliantly.’ And so Kenzari did. Promptly he was nominated Shooting Star in Berlin and Variety called him an ‘international star to watch’.

I have to admit, I was kind of nervous to meet this celebrity-to-be. I’ve met a lot of celebrities and I’m not one to easily be starstruck. But this man is not only on the radar in Hollywood, rumor has it he’s also not fond of interviews. And incredibly handsome, that too. So pressure was high.

But Kenzari took all my fears away the minute he walked in. Or maybe not immediately (cause yes, his handsomeness is kind of intimidating), but definitely after he gave me a hug to thank me for his presents. I bought him two books – because I knew this man is one of the few who actually reads. Quite instinctively I bought him two of my favorites: Ongoingness, of Sarah Manguso, and poems of Wislawa Szymborska. He was genuinely pleased with them, especially the first one. It’s a sort of reflection on a diary, and Kenzari confessed that it was exactly what he’s interested in at the moment.

That was the beginning of an unforgettable conversation in which Kenzari opened his heart. He told me about his incredible journey to Iceland, about love, his love for literature, for nature, for Ralph Emerson. He took me back to his roots, to Tunisia where he went hunting with his father and uncle, where he stared a wolf in the eyes. He told about reading and Japan and laughing on the set, about training and acting and keeping the focus on where it should be: on the inside, not on the outside.

We talked for hours and could still be talking. Marwan Kenzari is far more than a pretty boy on his way to make it in Hollywood. My guess is that he will grow out to be a kind of male version of Charlotte Rampling, starring in the better European movies, in character driven roles that go beyond nationality. Whatever he will do, he will do it brilliantly.