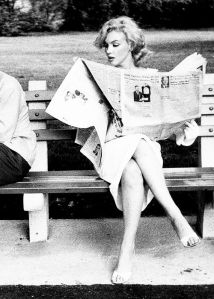 I was reading the newspaper the other day, when my daughter asked: ‘Is it good or bad news?’ She’s four years old, almost five, and obviously I always try to give her a fairytale version of the news. If there is one. And if not, I just tell her that in our own little world, everything is fine. That in some faraway countries there are people doing mean things to each other, but that those people don’t live in our country and that she certainly doesn’t need to break her pretty little head over it. Or something like that.

But this time, I didn’t have an answer.

Things, although spelled out black on white, suddenly were anything but clear to me. They weren’t one thing or the other. Not good or bad. Not far away or close by. There were women raped in Germany, men coming from Arabic countries, and people here throwing them all on one pile. Or rather on two piles: the women on the pile of all the women all over the world who have ever been raped or harrassed, the Arabic men on the pile of all Arabic men ánd all refugees, who supposedly don’t have any respect for women.

I was disgusted, of course, by the stories of the victims of mass harrassment in Germany, but I was just as disgusted by the vehemence with which everyone suddenly pointed fingers at all Arabic men, here, in Germany, in Africa, everywhere. I don’t know, it seemed as if many of them were happy to have found a stick with which they finally could beat them. Where were all those people when women complained about harrassment of white men? Where were the headlines when science came with reports about girls being raped by men they know – their boyfriend, neighbor, brother, their father?

And then there is Patricia Paay, saying on television something about a onenightstand with mr. Bowie. And once more she’s the subject of unashamed bashing on social media, a slut. Just as Anouk, who’s having her sixth child from another various father and is suddenly the subject of a moral discussion.

I have many things to say about men harrassing and raping women. I’m a woman myself and can share more than a handful of experiences in that field – none by Arabic men. Nevertheless I am inclined to worry about the attitude of islamic men towards women too, given the customs and traditions of their religion. But in this debate I don’t know which party to choose. I feel like the third dog, running away with the stick to hide and bury it so that everyone can get their senses back again.